Posted on September 2, 2012 By George Weaver 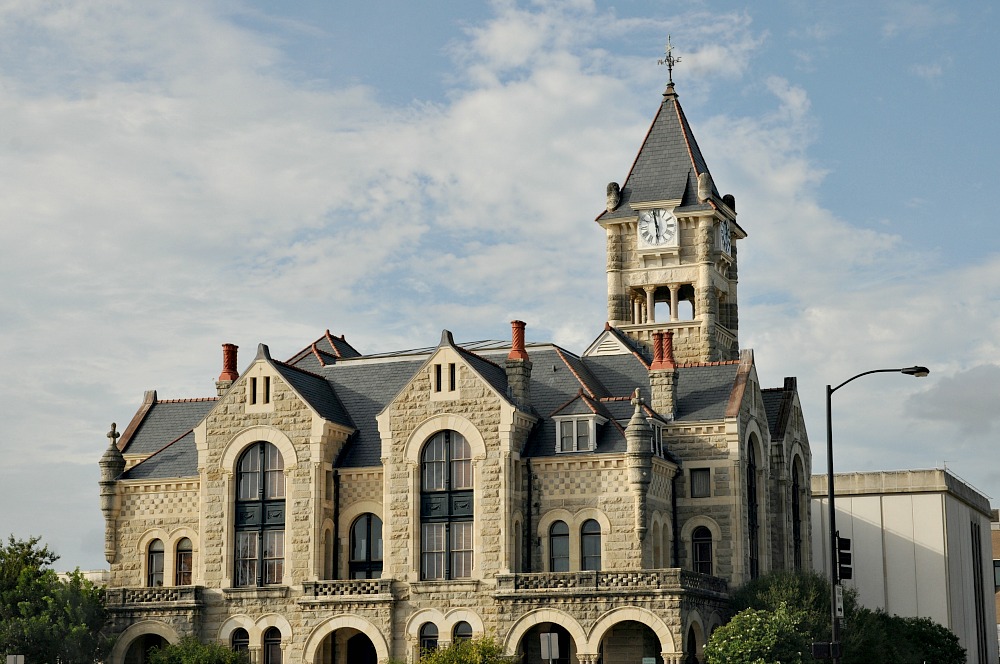 The first building I saw on my ride was Our Lady of Lourdes Catholic church.  Worshipers were coming out of the church, but they were kind enough to wait for me to snap this photo.  I was stopped in the middle of the street blocking traffic!  I believe this is the oldest Catholic church in Victoria. 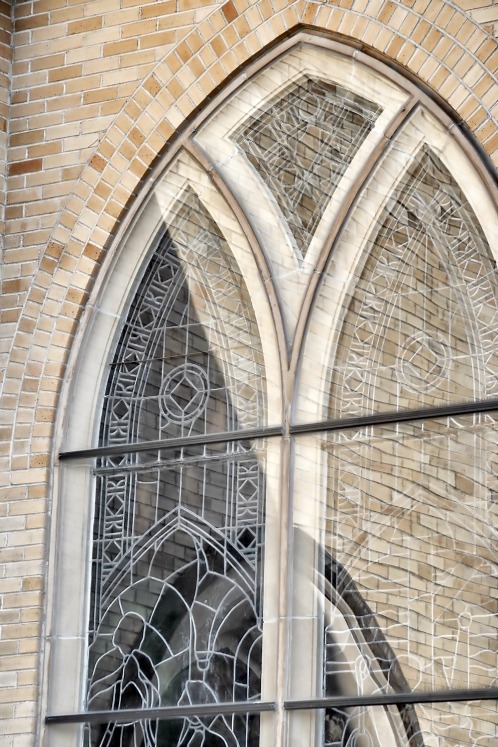 A couple of blocks away, I saw Trinity Lutheran church.  I liked the reflection in the window.

And the reflection in this window too. 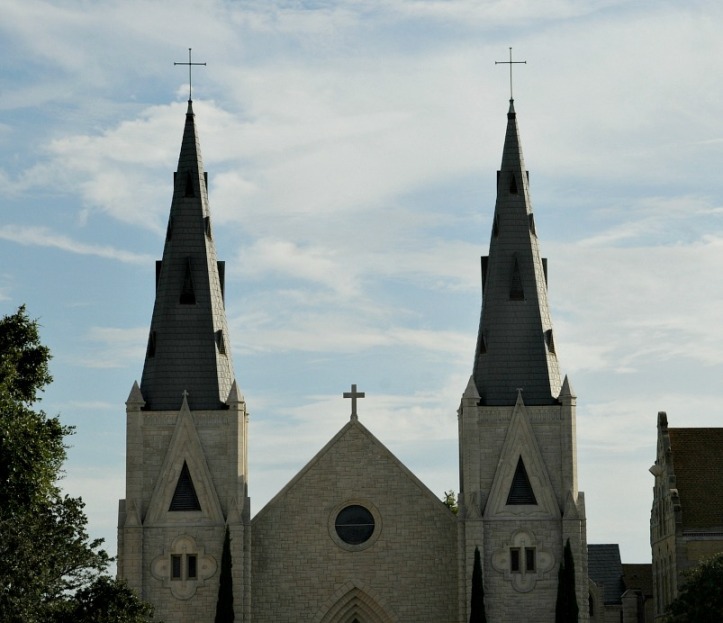 The twin spires of St. Mary’s catholic church are a landmark sight in our town.  The church stands opposite the police department at the intersection of Main Street.

In order to get a photograph of the front of the church, I turned the wrong way into the police department parking area (in front of a sheriff’s department patrol car!  I half expected the officer to ticket me, but he didn’t stop.  I suppose, as Elisa suggested, it was change of shift time! 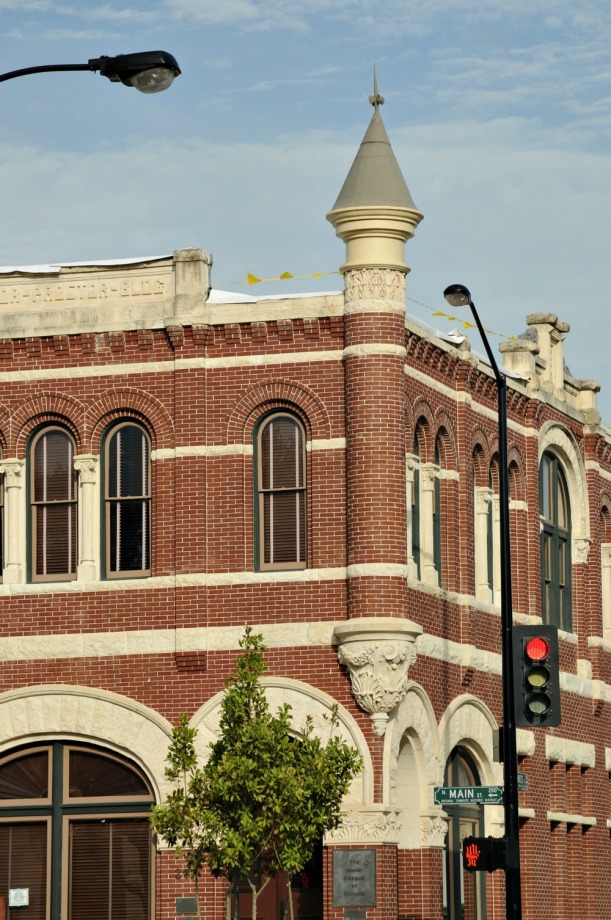 This detail of the building on the corner in the previous photo shows the Texas Historical Site designation plaque on its front.  The architectural elements incorporated into the facade of this building are beautiful.  Here, I notice that some repair must be going on to the roof of the building.

There is a huge parking area between this building and a bank building to your left and across the street.  I have no idea what this building is!  I don’t think I ever knew.  It is interesting, however, so I snapped it.  I have to inquire, I suppose.  🙂

This is another very interesting example of the varied architecture along Main Street.

Although I have lived and worked in Victoria since 1976, I know very little about the historical buildings.  I walked by many of them on this street every day when I was a social worker for the Department of Human Services located in a building downtown.   I suppose my focus was not on historical buildings at the time! 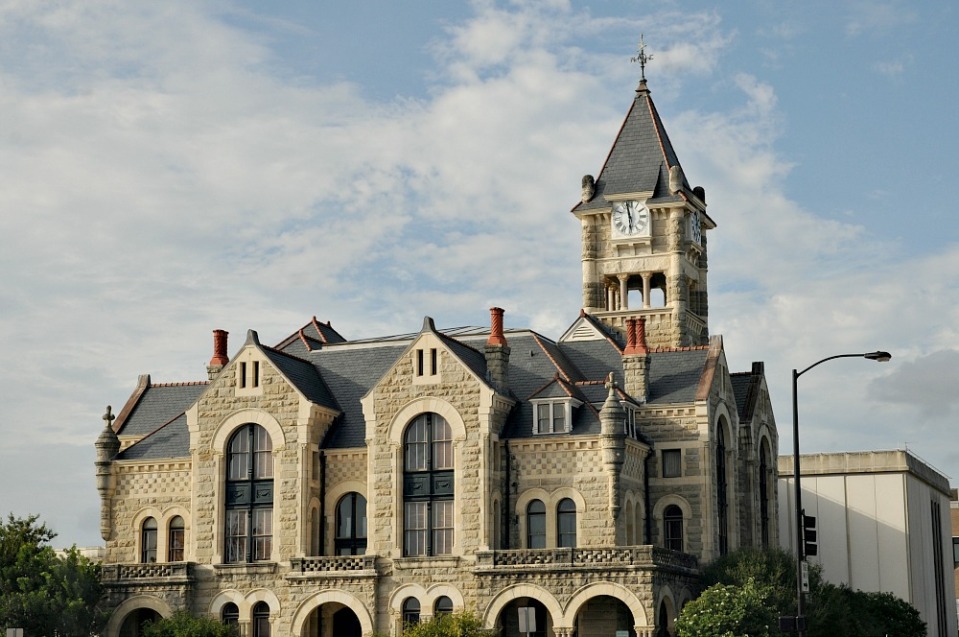 The courthouse in any small Texas town is usually the most elaborate building in town.  When we moved to Victoria and began to drive through small towns, I was struck most by the huge courthouse buildings and how elaborate they were.  Most are constructed of imported marble and stone and tiles and other materials not available in the areas in which the buildings were built.   It appears, at least to an outsider, that the first buildings of any significance to be built in these towns were churches, courthouses and banks.  They survive as the most intriguing examples of period architecture in Texas.  This photograph is of the side of the courthouse adjacent to the jail.   Court is no longer held in this building.  The functioning court is held in the white building beside the old courthouse.

On my way out of downtown, I took some photos of a few businesses and old houses under renovation, but they seemed too shabby for inclusion here.

NOTE:  If the perspective in these photographs seems strange, it is because they are shot from my car window.  I have a tremor which is prohibitive when I attempt to walk around holding my camera.  I brace my arms on the car door window frame or on the steering wheel to steady the camera.   In the process, I am watching traffic (cars are trying to eliminate me) and trying not to be such a terrible nuisance!  I appreciate your kindness in accepting my strange photographs and accepting me with such kindness and grace in the blogging community.  Bless all of you!